Variable type technology was introduced in 2016. For the first time since the invention of moveable type, one single “font” can contain all the styles of a typeface family. Weight, width, optical sizes, and other properties can be controlled and tweaked at will by the font user. Variable fonts already seem to become the default method of designing fonts, but on the user side, cost stands in the way (a var font generally costs as much as a whole family), and practical objections (In design apps, working with var fonts is not yet hassle-free).

The three most frequently cited advantages of variable fonts are compact file size (especially an advantage for non-Latin scripts), the return of optical sizes, and the ability for font users to tweak the appearance of text. The design projects on Fonts In Use with “variable fonts” as the tag fall mainly into the latter category. Here are four examples where designers have used their project as a typographic playground, exploring the possibilities of variable fonts within a set of self-imposed constraints. 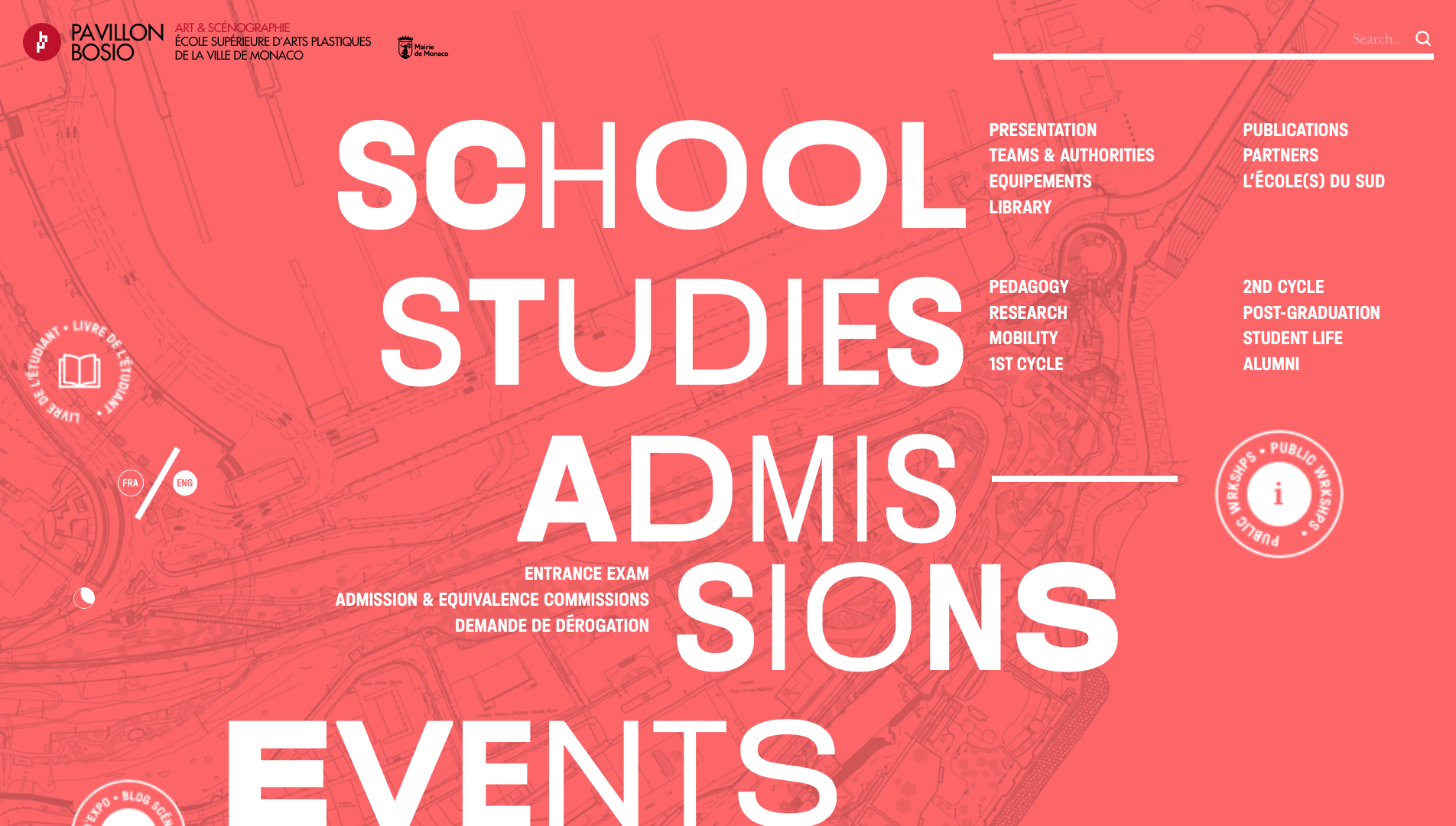 Despite Halvar’s extensive set of styles – three widths, each in nine weights – the large type on the home page is likely rendered in instances of the typeface that are not available as ready-made static fonts (Engschrift Bold, Breitschrift Light, etc.). Source: https://pavillonbosio.com 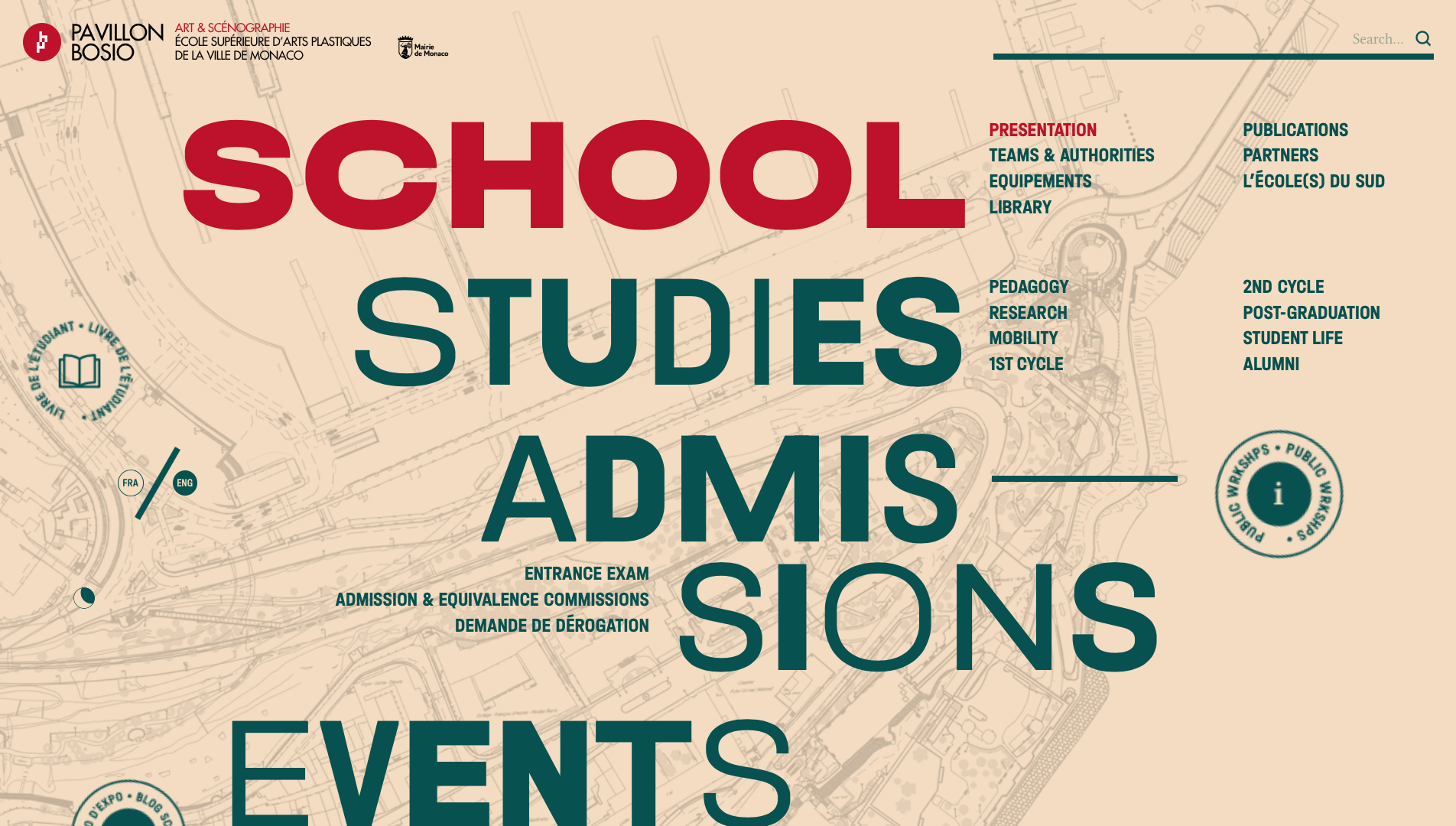 Home page with alternate colors switched on and new compositions for the headlines. The smaller menu items stay in character: their weight and width remain unchanged in all instances of the website. Source: https://pavillonbosio.com 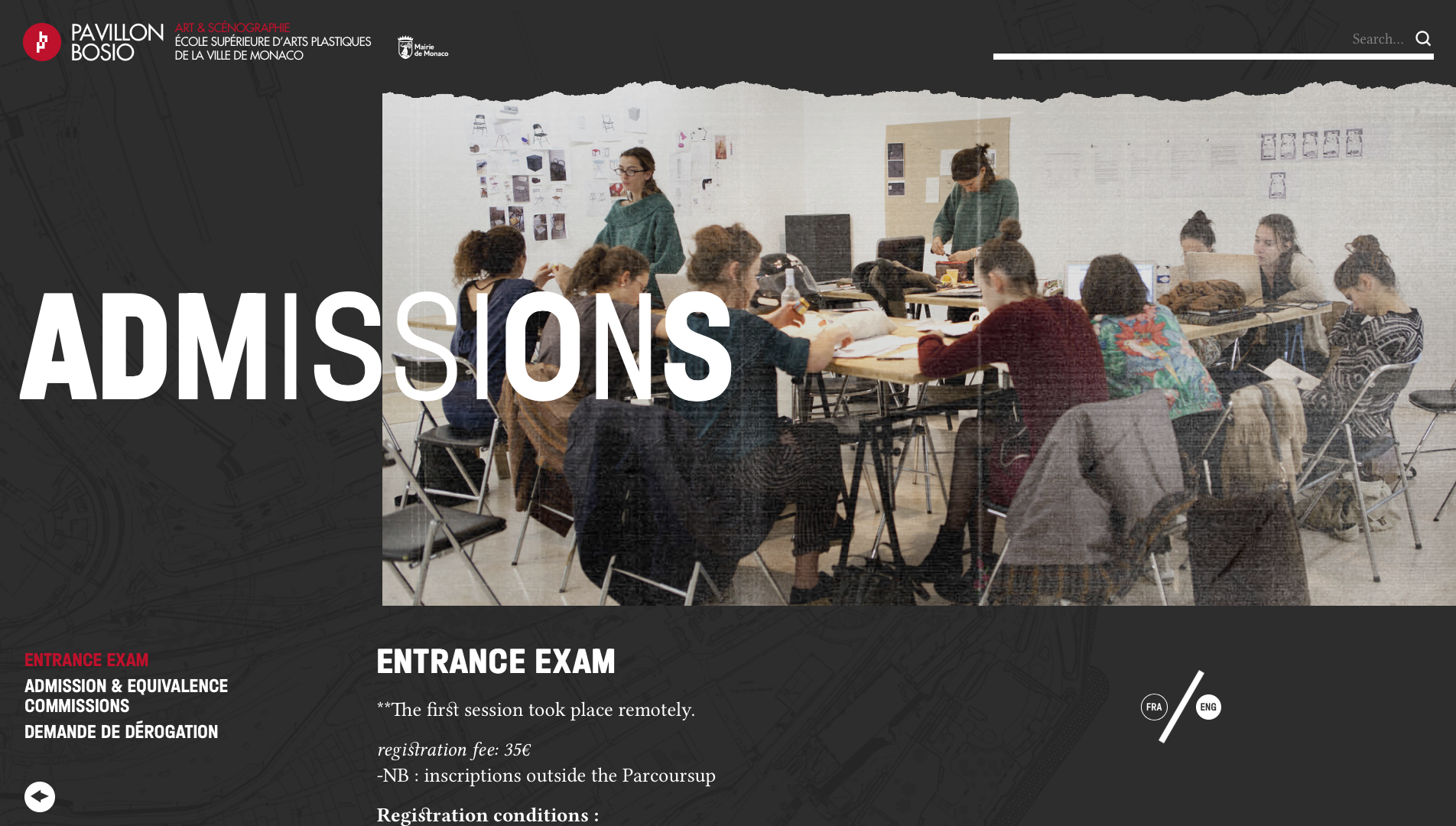 Admissions page. Ripped rectangles are used as a template for header images throughout the website. Linux Libertine (with discretionary ligatures) comes into use as a supplementary typeface for body text. Source: https://pavillonbosio.com 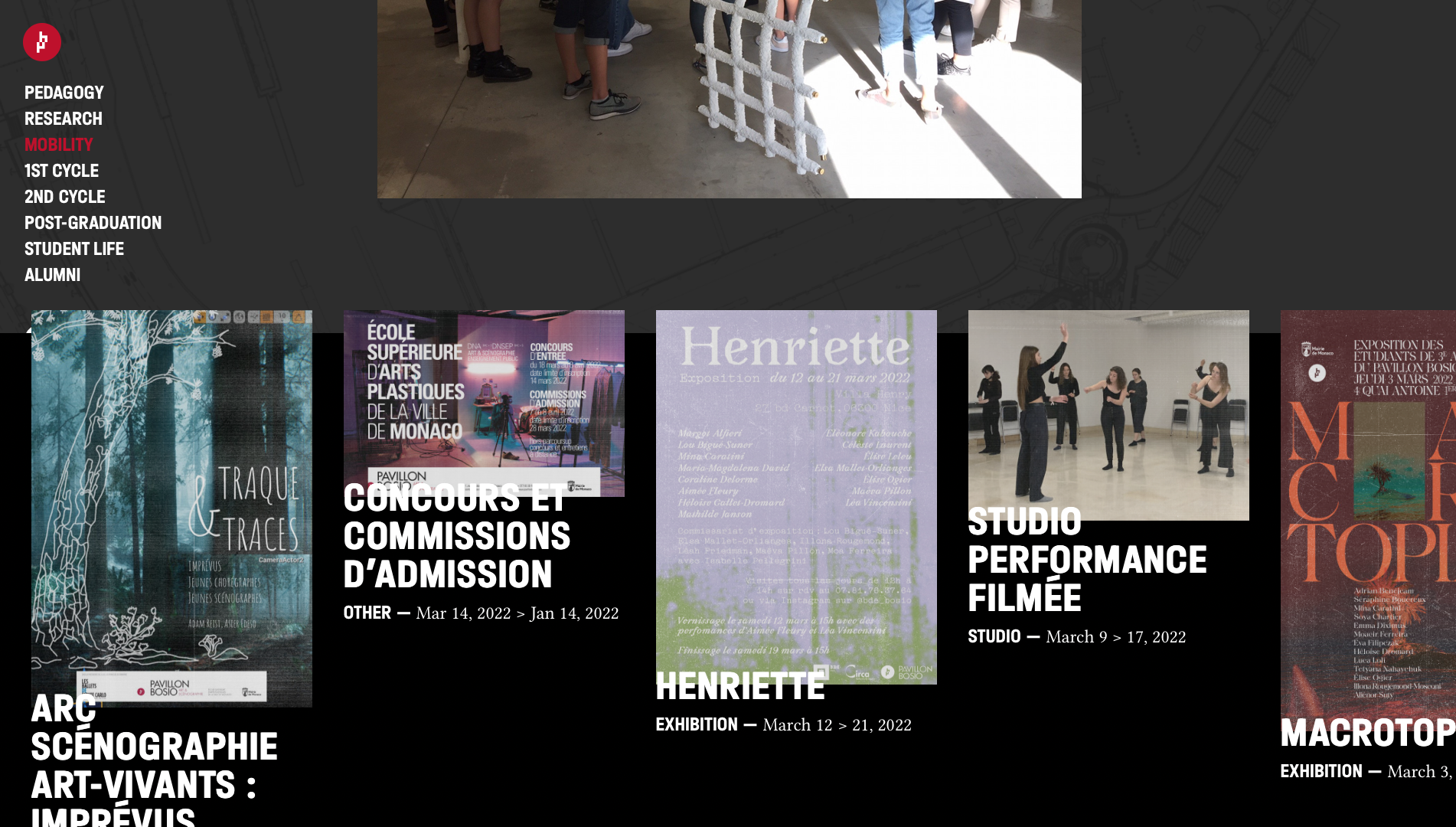 Recent activities are presented as a poster wall, overlapped with information set in Halvar and tight line spacing: accents almost touch the capitals from the line above. Outside of the website, Esap designs can use any suitable typeface. Source: https://pavillonbosio.com

The Pavilion Bosio in Monaco is home of the École supérieure d’arts plastiques de la Ville de Monaco (“University of Plastic Arts of the City of Monaco”), or Esap.

For the corresponding bilingual website, the designers at Studio Fables used a variable version of Halvar to emulate the Dada art movement from the early 20th century. Custom code made it possible to assign a random weight and width to each individual character in the menu headings, making for a striking home page with vivid hover effects. The menu appearance is generated in a new composition at each visit: one cannot visit the same website twice. The same variable font file (“Halvar Flex”) was used for the smaller subheadings and navigation. Like the headlines, they are set in all caps throughout the website, but as a contrast, their weight and width remain unchanged.

See the original version of this post on Fonts In Use, where it was contributed by TypeMates. 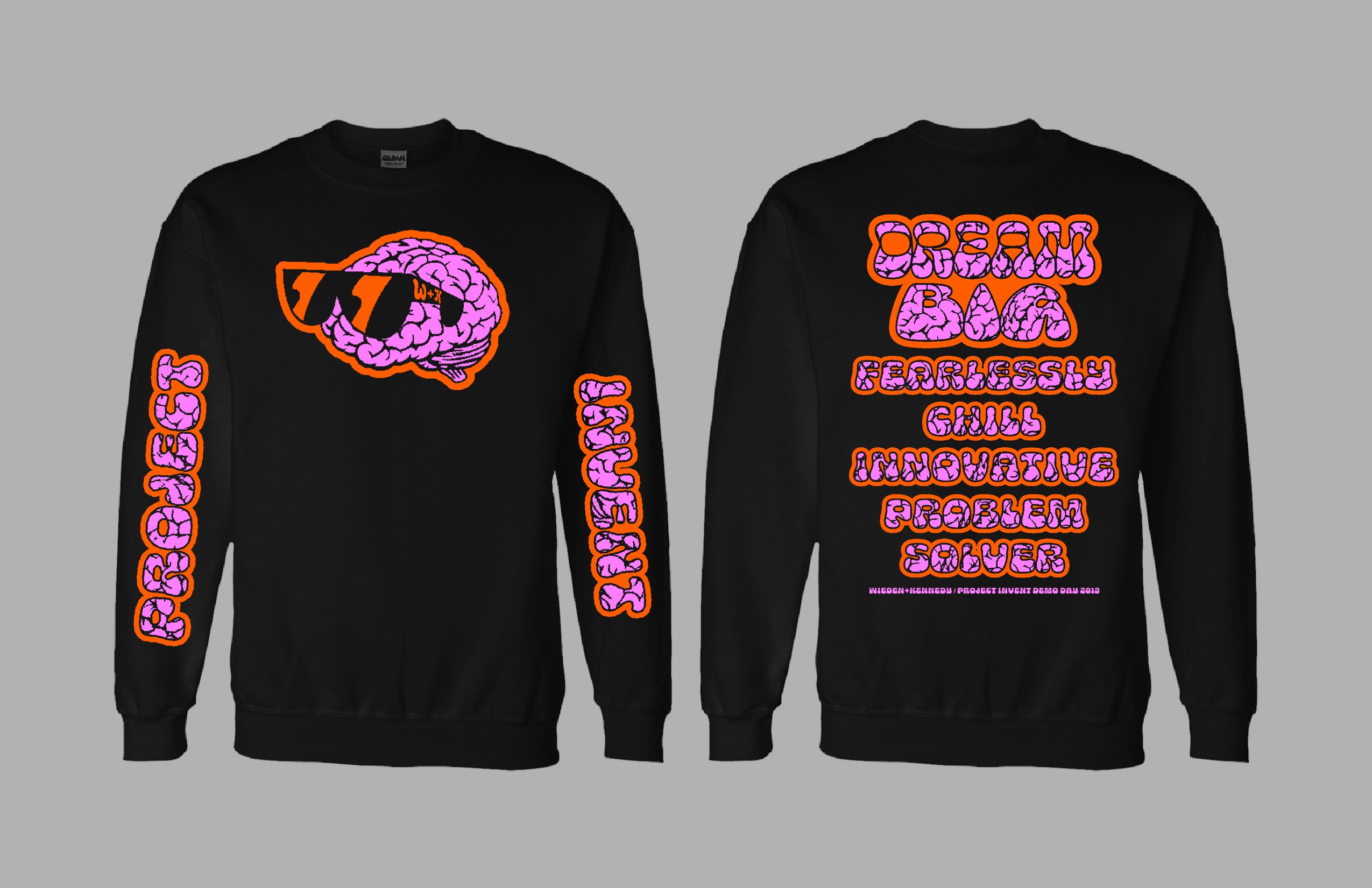 Front and back of the shirt. Image by David Chathas

At first glance, the brain pattern and wavy letter shapes may seem hand-drawn. A closer look reveals the entire artwork to be composed of only straight lines – a mix of cool science and 1980s bitmap vibes. Image by David Chathas 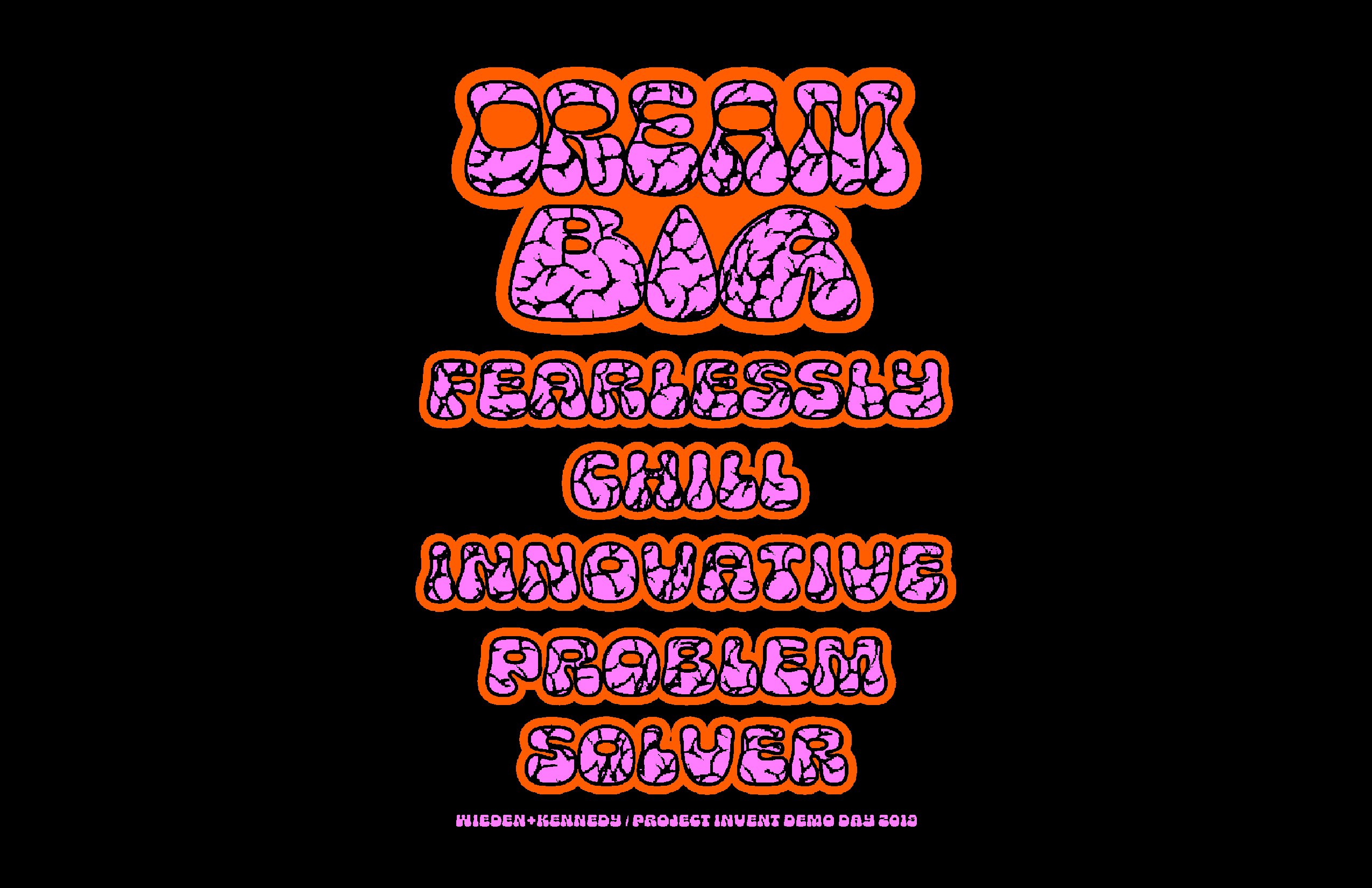 Back print, using at least four instances of Cheee. Image by David Chathas.

This long sleeve shirt was designed by David Chathas at Wieden+Kennedy for the Project Invent Demo Day 2019. Project Invent “empowers students with the 21st-century skills to succeed individually and impact globally,” and aims to create a generation of “fearlessly chill problem solvers.”

The font in use is Cheee, an amorphous face dreamt up by James Edmondson and first released in February 2018 via Future Fonts. A few months later, Cheee was upgraded to variable font format, with two axes, “Yeast” (contrast, or, more precisely, the weight of hairlines) and “Gravity” (bottom-heaviness). Chathas employed several variations: While the words “Dream” and “Big” are both exposed to a fair amount of gravity, the latter got a larger pinch of yeast. The blubbery letterforms were then customized with a cerebral pattern fill that references the key visual – a cool brain.

See the original version of this post on Fonts In Use, where it was contributed by Florian Hardwig. 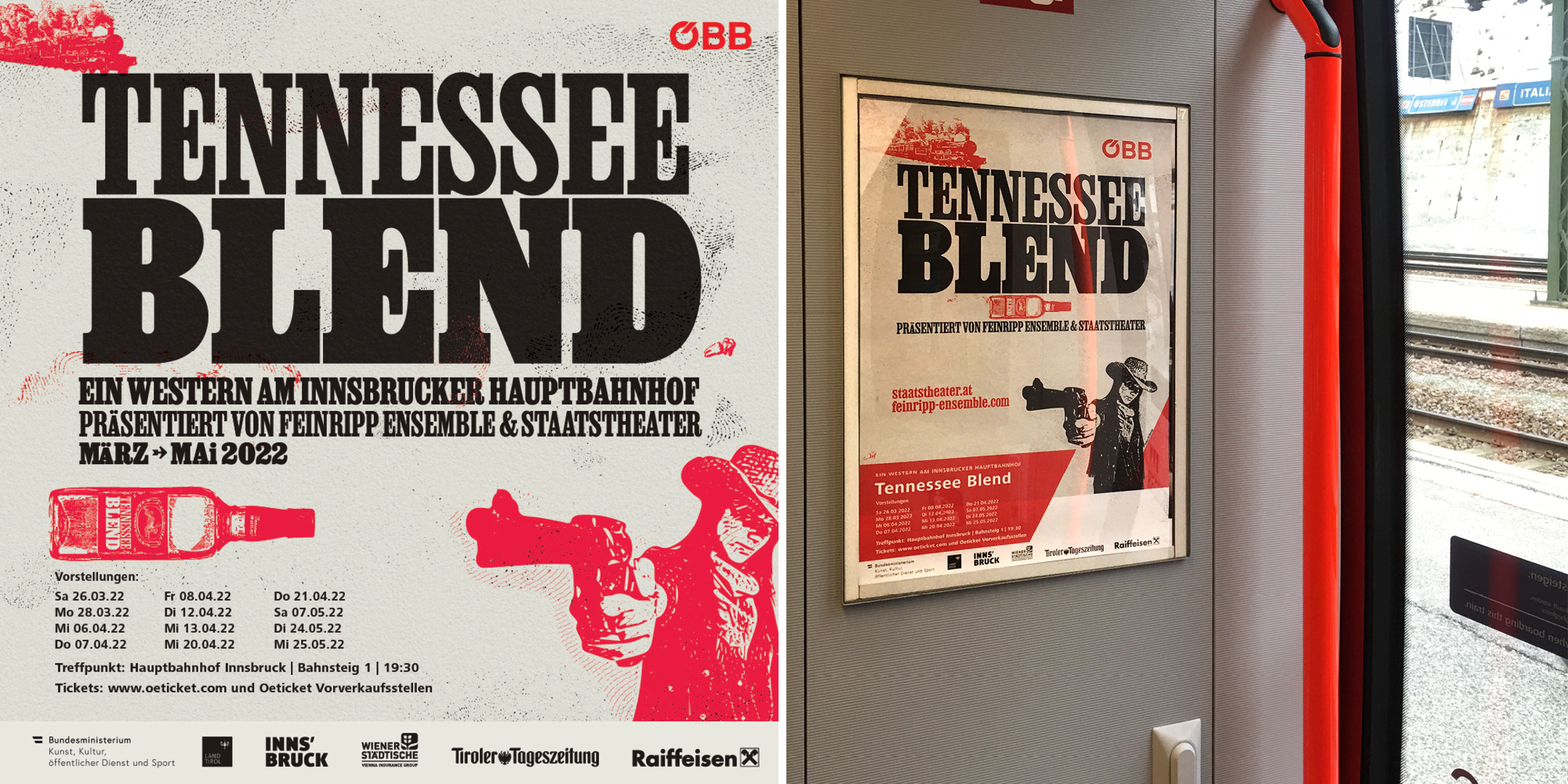 The posters are displayed on commuter trains throughout the Tirol region for the duration of the performance run, March through May 2022. Photo: Sol Kawage 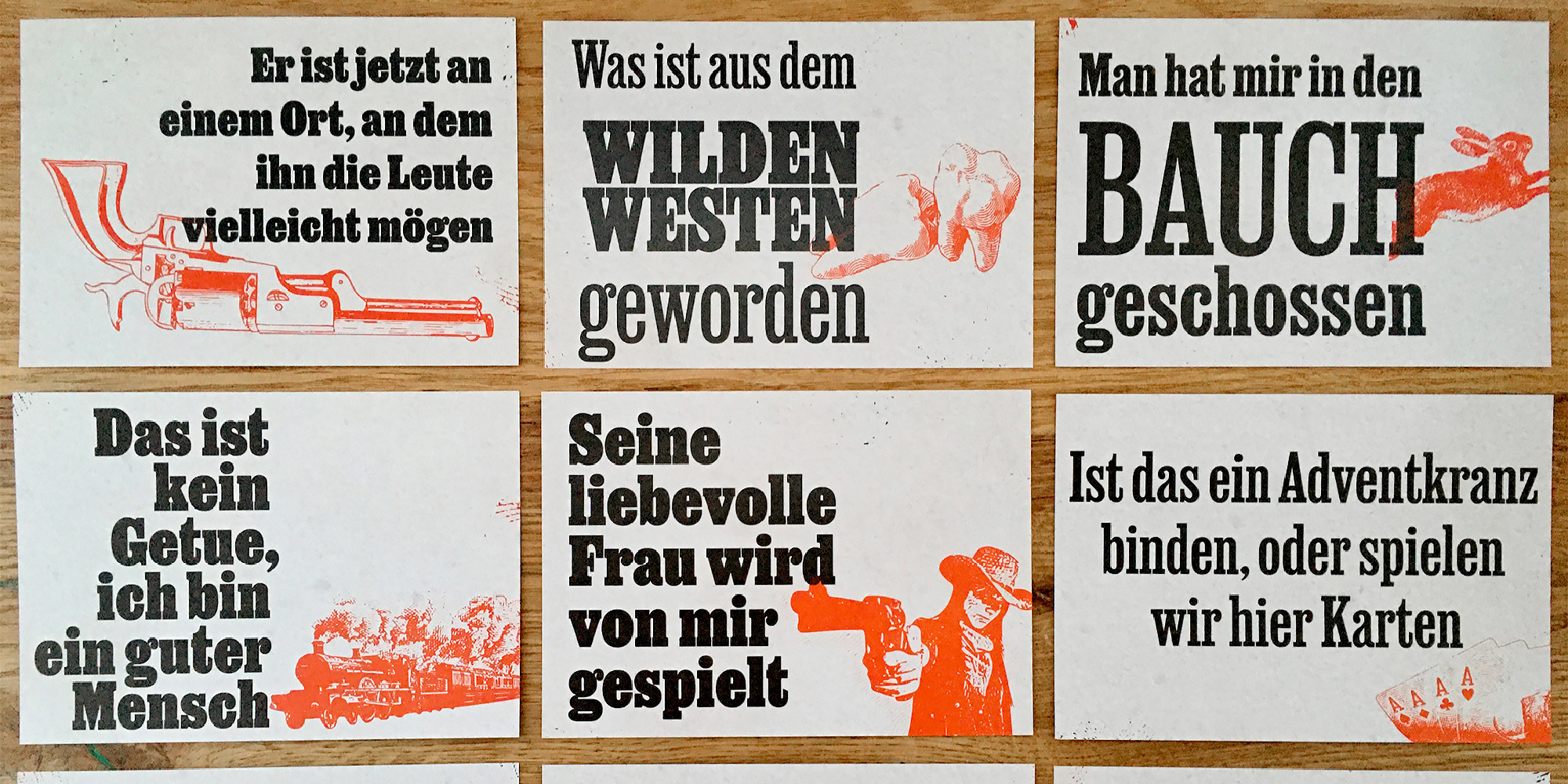 An accompanying set of cards, distributed teasers. Quotes from the script and imagery hint at details storylines from the play. Photo: Sol Kawage 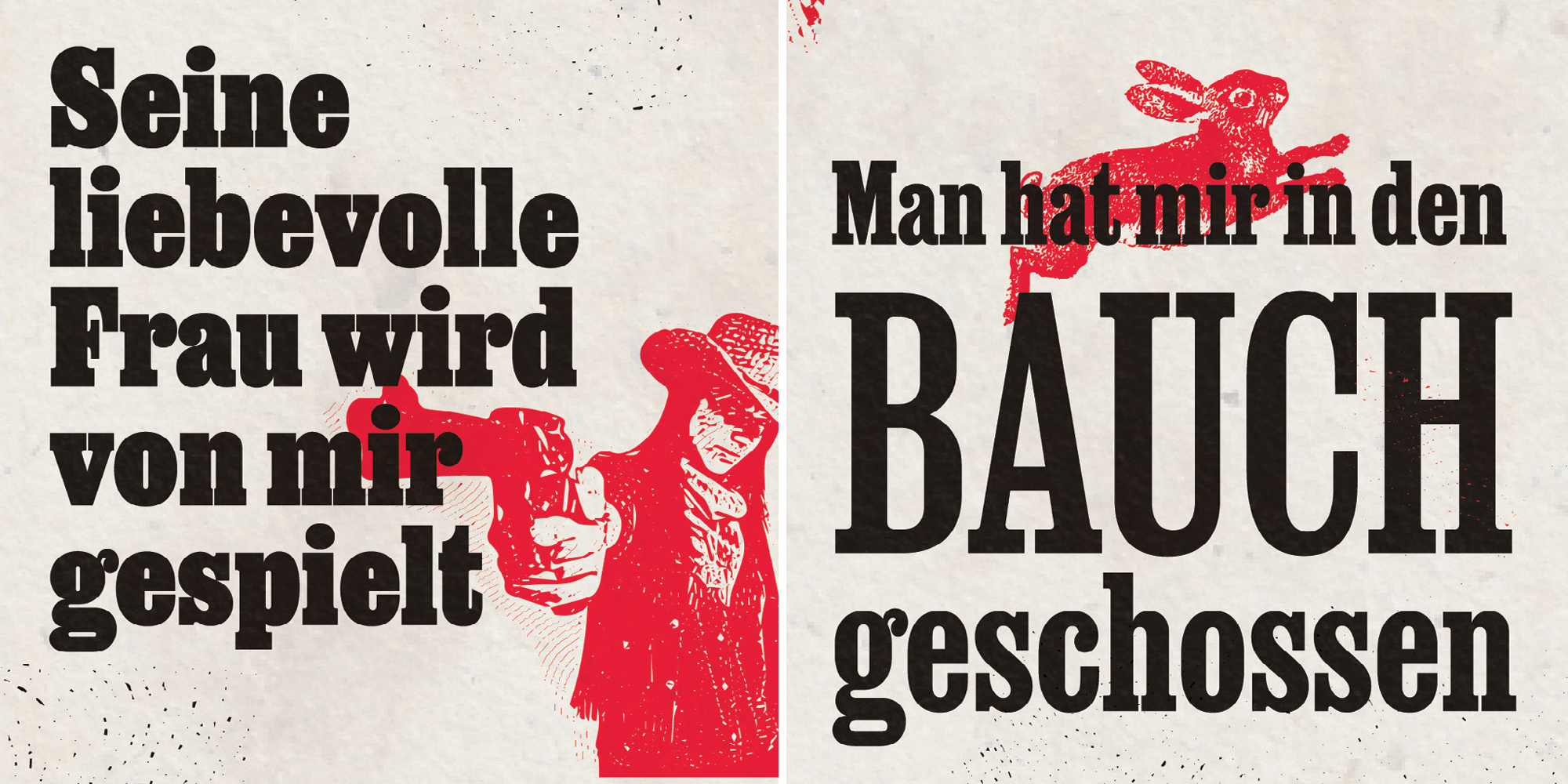 Two social media posts. Left: “His loving wife is acted by me”, right: “They shot me in my belly”. Source: https://uauage.org/portfolio/tennessee-blend/

Tennessee Blend is a Wild West play by Austrian theatre companies Staatstheater and Feinripp Ensemble. Sponsored by ÖBB, the Austrian railway company, the public is taken by dedicated trains to the roundhouse of Innsbruck’s main train station, where the play is staged. Designed by Sol Kawage, the title is set in Job Clarendon Variable, as are the postcards with quotes from the play. Kawage fell for Job Clarendon as soon as she test drove it for the design:

“Playing with the weight axis and the sizes was just so much fun. I spent too many hours finding the right combinations for my lines: I wanted to make each text block to look a little bit off, like the play. I never worried about how many instances I was using: it was the point of using a variable font that I could be free from the instances and work entirely within the fuzzy logic of the variable font.”

Having worked with wood type before, Kawage saw opportunities for using modern font technology to evoke letterpress typography: “I also loved playing with the alternate glyphs in the font, in a way that isn’t probably the one DJR intended: look at the E’s in Tennessee… In wood type, often there are slightly different versions of a sort and it makes the word less boring, even if it’s a repetition of the same four letters. Another thing that made me fall in love with Job Clarendon Variable was the fact that I could make letters with umlauts fit into my lockups by making them smaller and increasing the weight to create a uniform look, keeping my leading uniform and compact.”

See the original version of this post on Fonts In Use, where it was contributed by Sol Kawage. 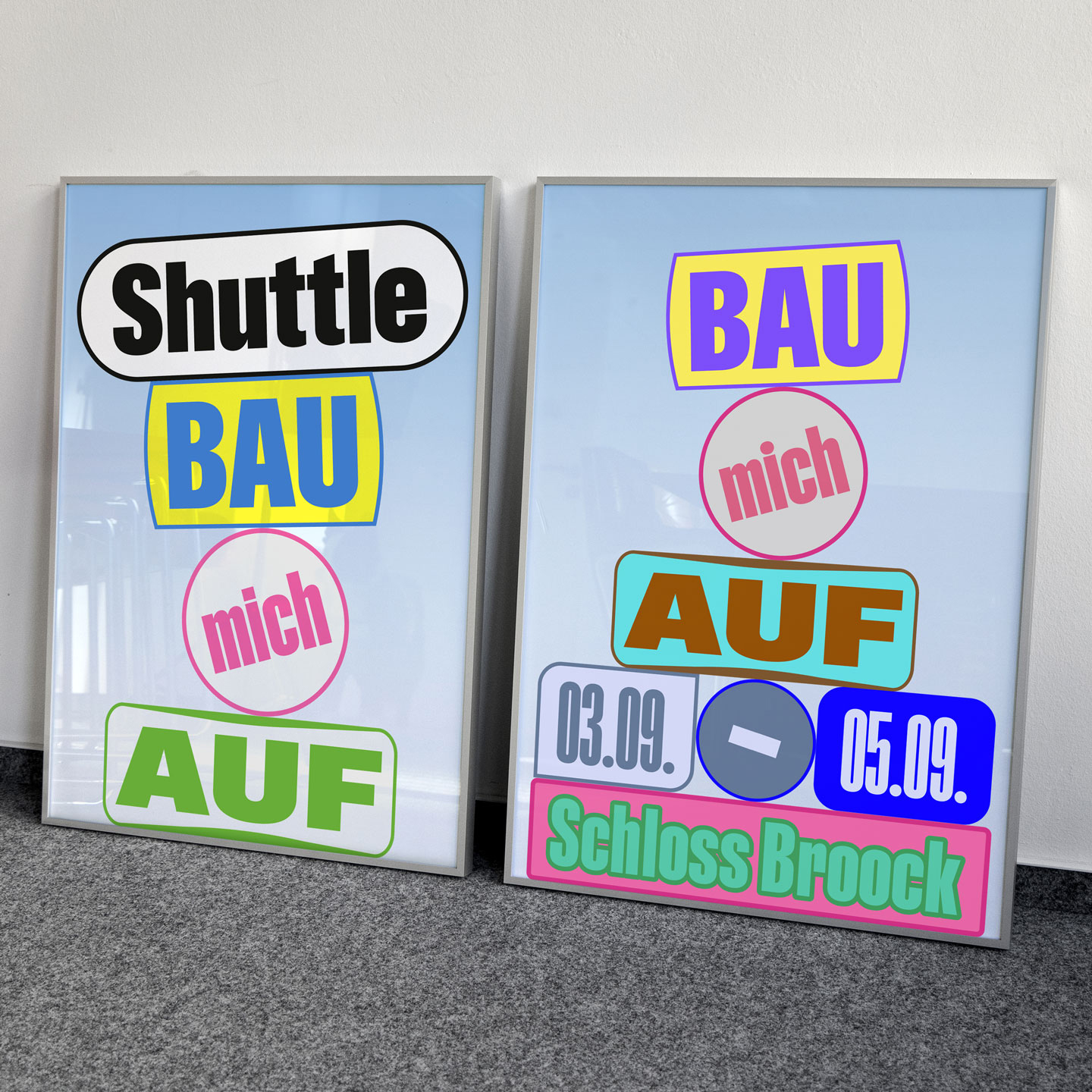 On festival posters, only the concept stays the same. Any element – color, composition, or stylistic sets – may change from one poster to the next. Note the change of tittles on the i. Source: https://www.itsnicethat.com/articles/yosh-schreiner-tim-lindacher-cau-mich-auf-graphic-design-041121 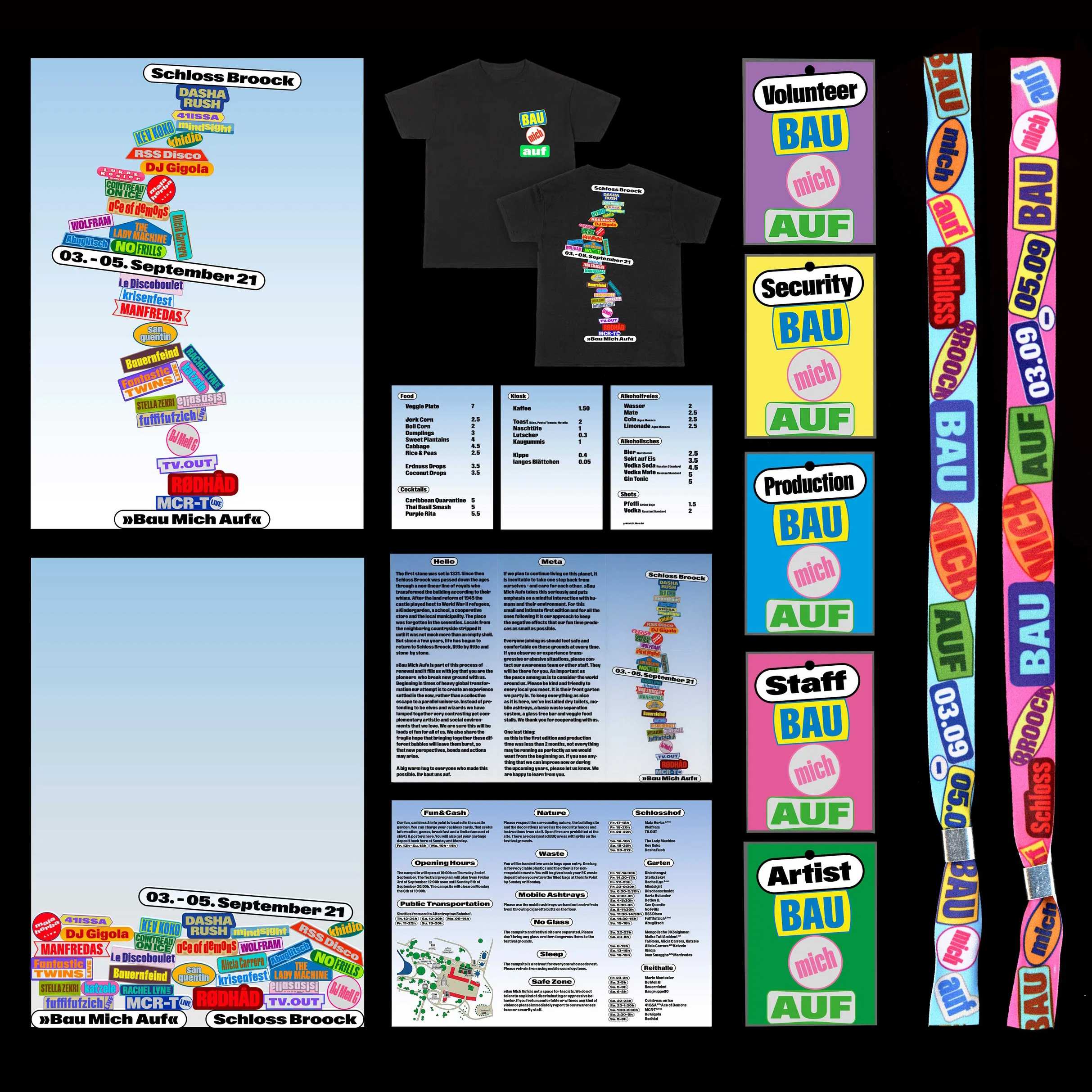 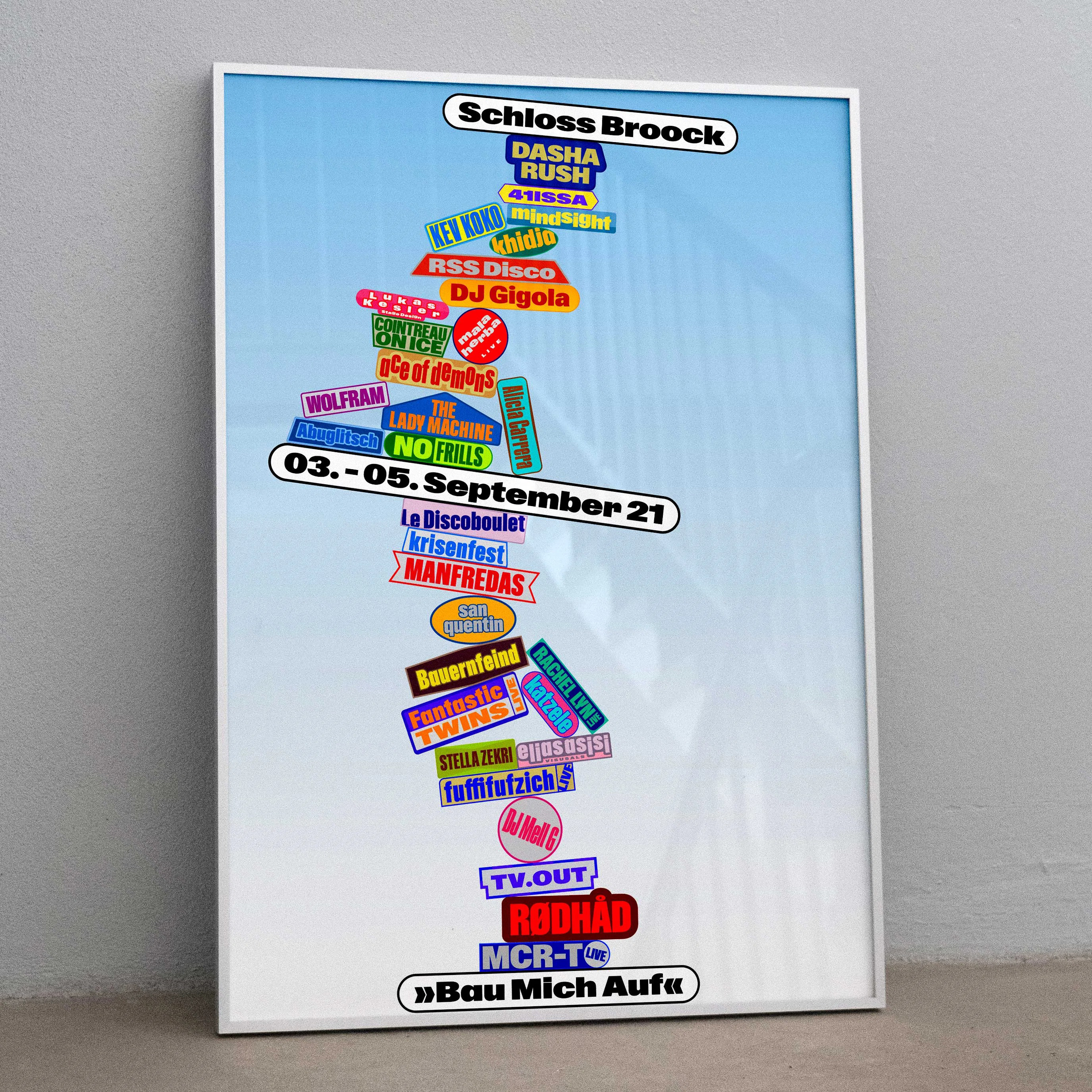 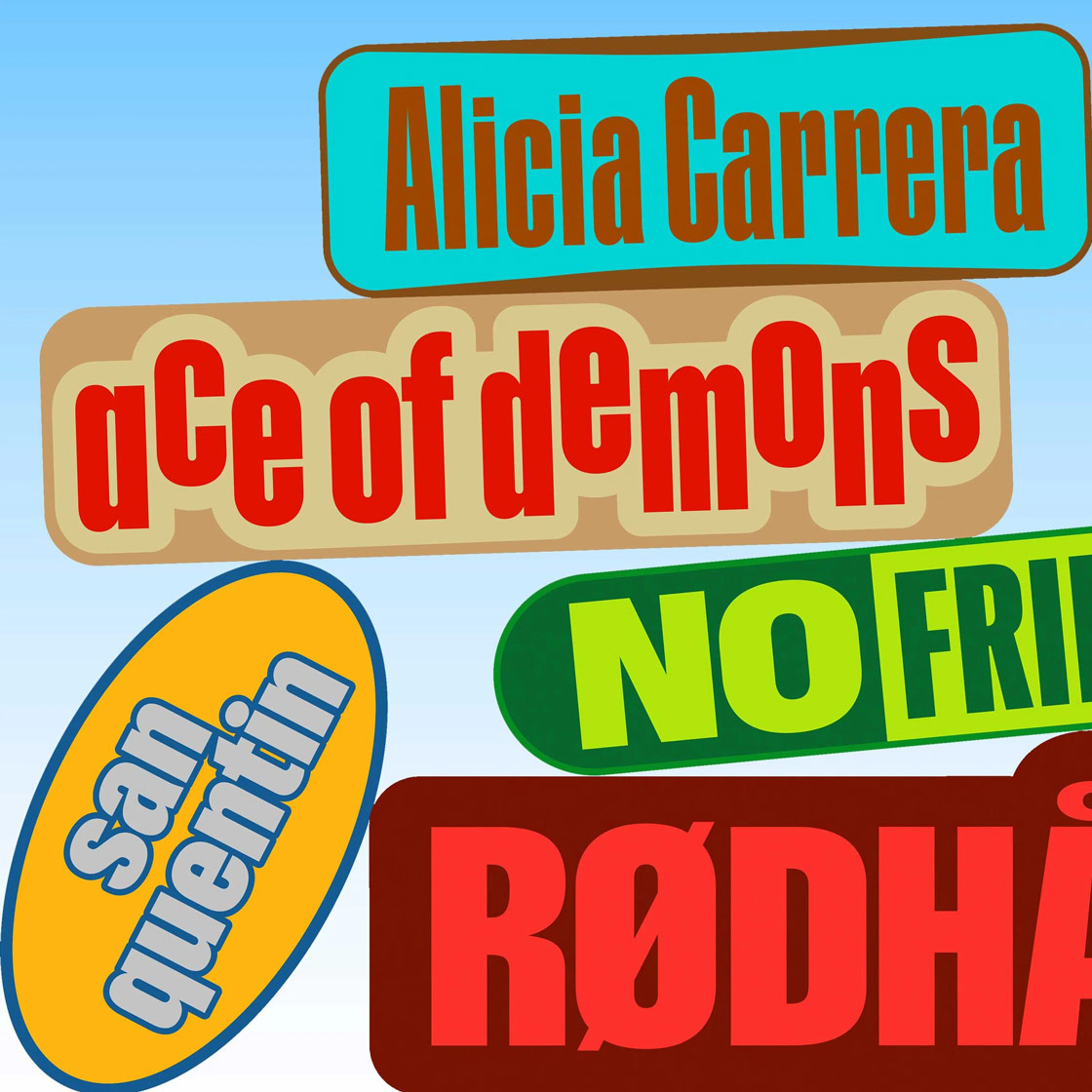 Bau Mich Auf (“Build Me Up”) is an electronic music festival at Schloss Broock in Alt Tellin, two hours north of Berlin. The first edition took place in September 2021. Yosh Schreiner and Tim Lindacher of Live From Earth made early use of ABC Gravity for the event’s identity.

Through associations with outlandish castles and scaffolding, the design duo arrived at a series of posters on which the design is built up with individual blocks for each artist – a series of constructions that seem to capture the moment just before or after the structure collapses. Dinamo’s variable font Gravity proved to be the ideal building material, with just enough variety to avoid becoming too boring or repetitive, yet modest and “regular” enough to not draw too much attention to its shapes. “Gravity” is also built into the fonts in the form of stylistic sets, where all or selected letters float up to match the cap/ascender height.

See the original version of this post on Fonts In Use, where it was contributed by Dinamo Typefaces.