There are probably more corners in Kopius than you’d expect from a serif typeface. Many of its stroke terminals feature additional strokes of their own, adding energy not typically found in faces optimized for immersive reading. When it came to Kopius’ design, Sibylle Hagmann was inspired by Liberta, a 1950s typeface that hasn’t seen regular use since the ’80s. While this review heavily focuses on Kopius’ Liberta heritage, Kopius is not a strict revival typeface. Instead, Hagmann’s letterforms are probably based just as much on her intuition as on Liberta’s example. At the Kontour foundry website, Hagmann writes that “Baskerville-like open and modern typeface proportions further characterize Kopius’ letter dimensions.” A detailed discussion of what makes a Baskerville a Baskerville will have to wait for another time, dear reader, but I did address what typographers mean when they talk of “modern” typeface proportions in an earlier review.

Kopius comes in seven weights, ranging from Light to Black. Each has an upright and an italic style available. The italics’ design is independent, featuring letterforms that aren’t merely sloped versions of what you find in the upright fonts. The background shapes in the graphic shown above come from two additional family members: “Kopius Box Headings” and “Kopius Labels.” Those contain shape libraries of plump, rounded forms that harmonize with the letterforms in the family’s other fonts.

Sibylle Hagmann expanded Kopius with a Condensed family, too. All in all, it is a complete editorial-design system. Like Kopius, the Kopius Condensed fonts take design cues from the Liberta typeface. But Kopius Condensed is a smaller family. Although it also has seven weights, there are no italics.

While Baskerville’s typefaces need no introduction, most readers are likely less familiar with Liberta – a typeface released in the 1950s by VEB Typoart Dresden, the state-owned typefoundry of the former East Germany. Liberta was one of Herbert Thannhaeuser’s typefaces. Born in 1898, Thannhaeuser was one of the most prolific designers working in Germany between about 1922 and 1963. His first significant job was at Berlin’s Erasmusdruck printing house. A 1928 catalog of its typefaces, laid out by Thannhaeuser while he was Erasmusdruck’s creative director, has recently been digitized.

1928 was also the year that the first typeface Thannhaeuser designed was released. The D. Stempel AG foundry in Frankfurt published it. However, most of his pre-war typefaces came out through Schelter & Giesecke, a giant Leipzig-based typefoundry whose history stretched back to 1819. According to a short Thannhaeuser biography written by the type designer Andreas Seidel, Liberta grew out of an unreleased type design called Europa-Antiqua. Thannhaeuser had drawn Europa-Antiqua for the German branch of Mergenthaler Linotype in Berlin, which was to produce matrices of its text sizes for the Linotype machine. Schelter & Giesecke was to cast foundry-type versions of its text sizes and its display sizes. Thannhaeuser settled in occupied Germany’s Soviet zone after the Second World War and became Typoart’s artistic director in 1951. VEB Typoart Dresden was an amalgamation of Schelter & Giesecke and the Schriftguss foundry in Dresden. The communist authorities had nationalized both.

Because East German printers could not afford to regularly import matrices for their Linotype and Intertype machines from Western Europe, Typoart reverse-engineered the production of linecasting matrices. Liberta was published both as typesetting-machine matrices and as fonts for hand setting. Linecasting machines had no support for kerning, which explains why Liberta’s f was so narrow (Hagmann retained the narrow f in Kopius). 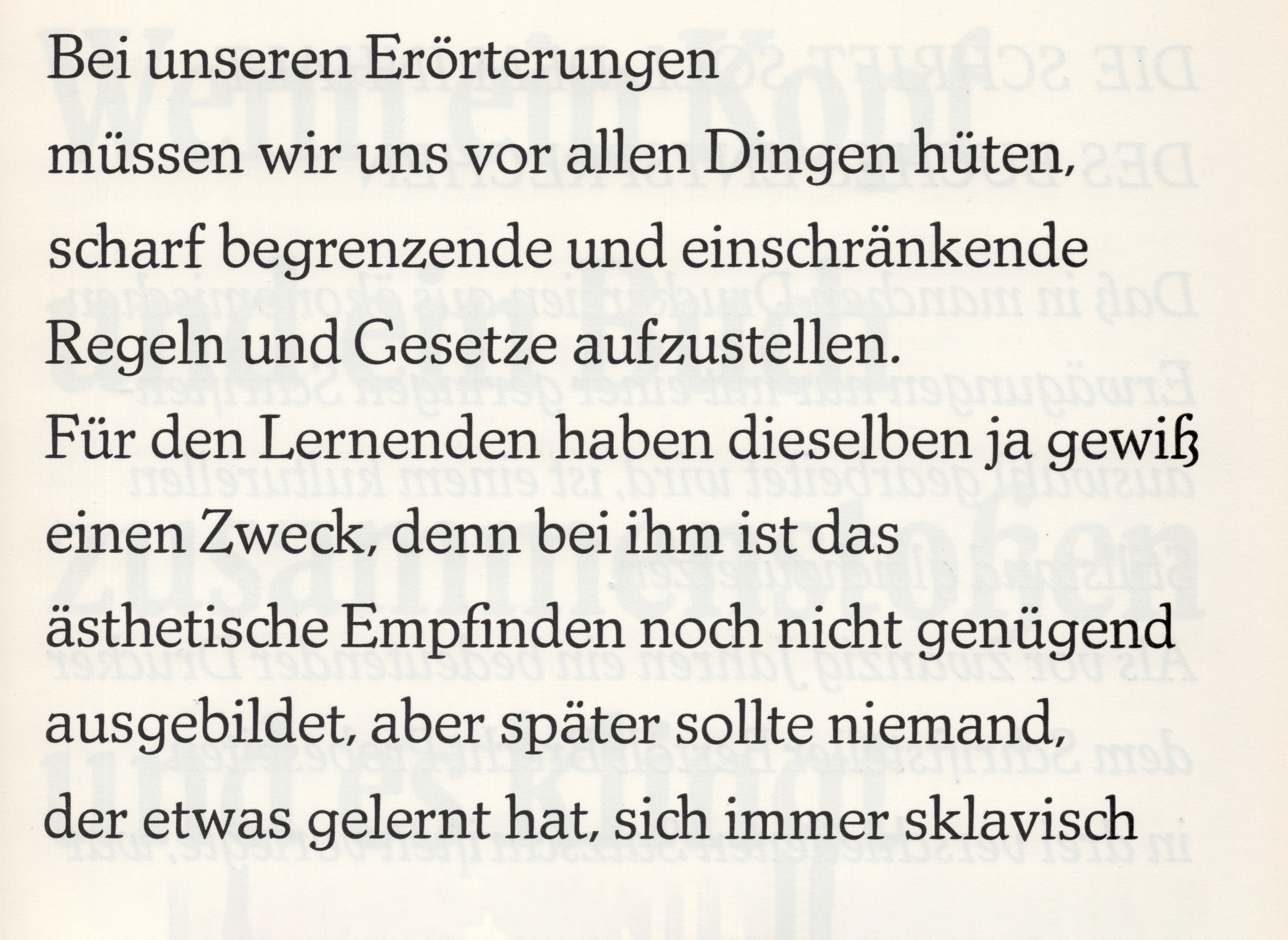 One of the display sizes of Liberta’s regular weight (Liberta mager), scanned from page 121 of Albert Kapr’s 1973 book, Typoart Typenkunst. Collection of the author. 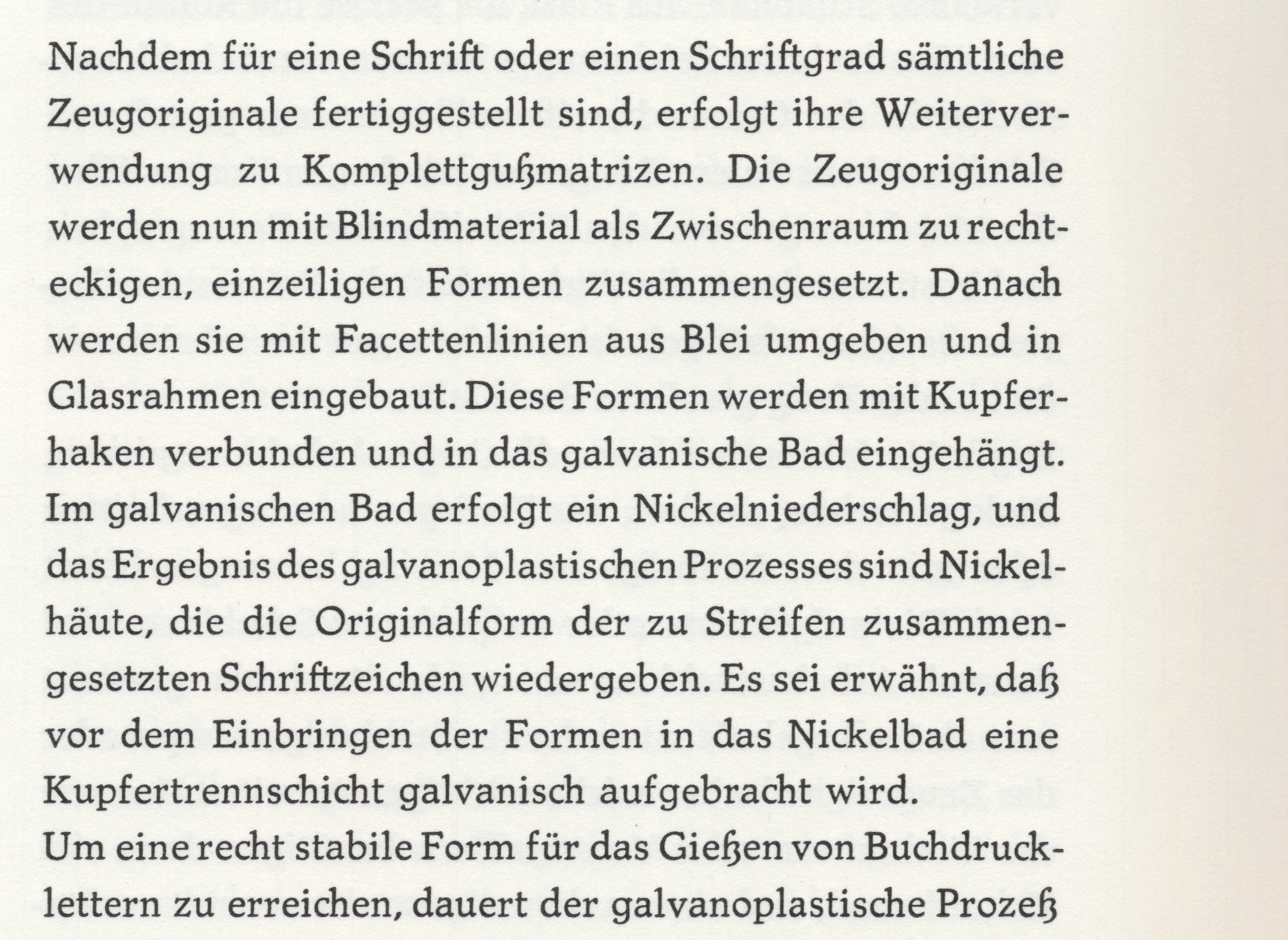 Now that you’ve gotten a good look at Liberta’s regular weight at a large size, here’s how the font looked in body copy – the environment for which Herbert Thannhaeuser primarily designed it. Scan from page 46 of Albert Kapr’s 1973 book, Typoart Typenkunst. Collection of the author. 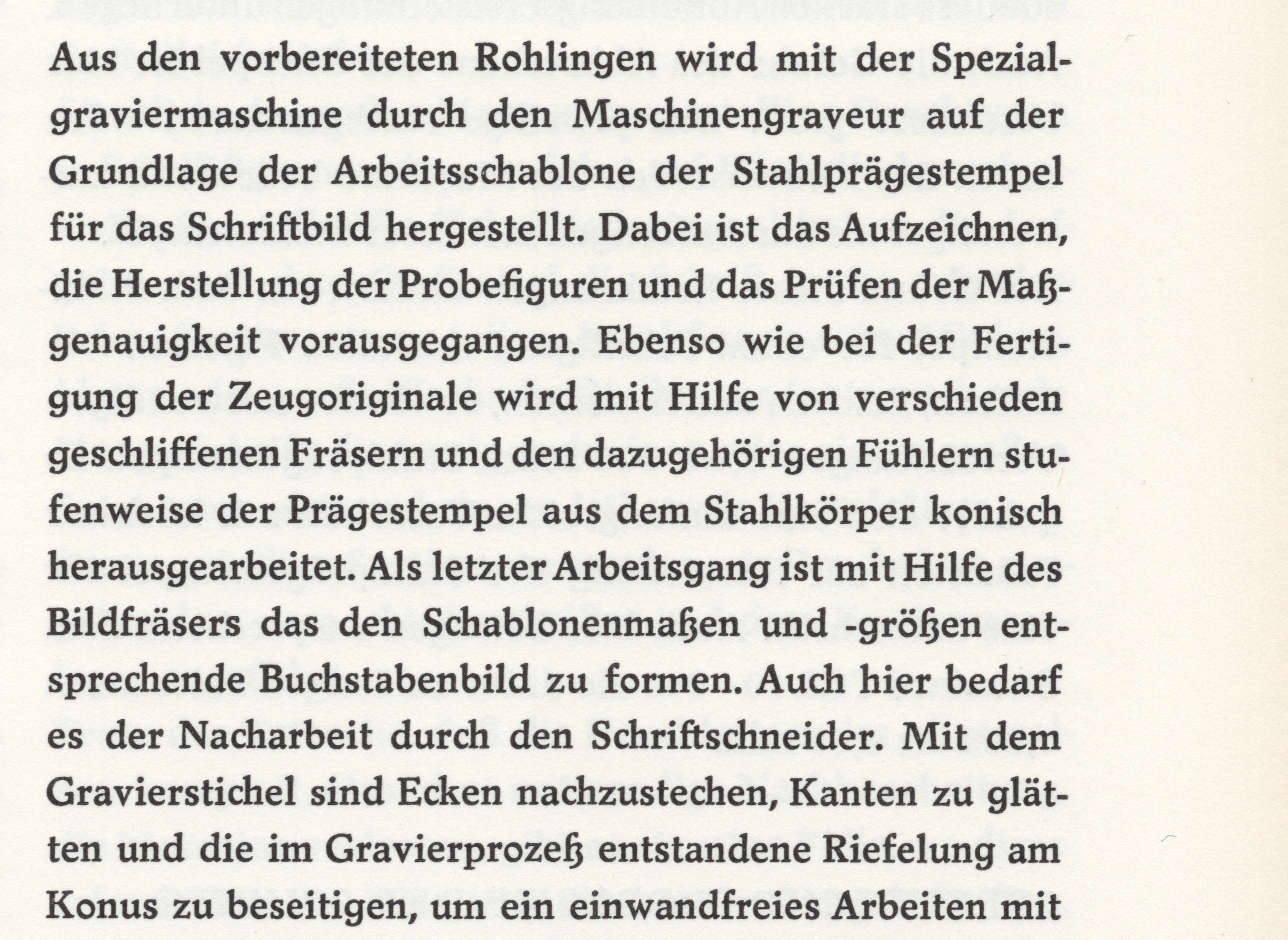 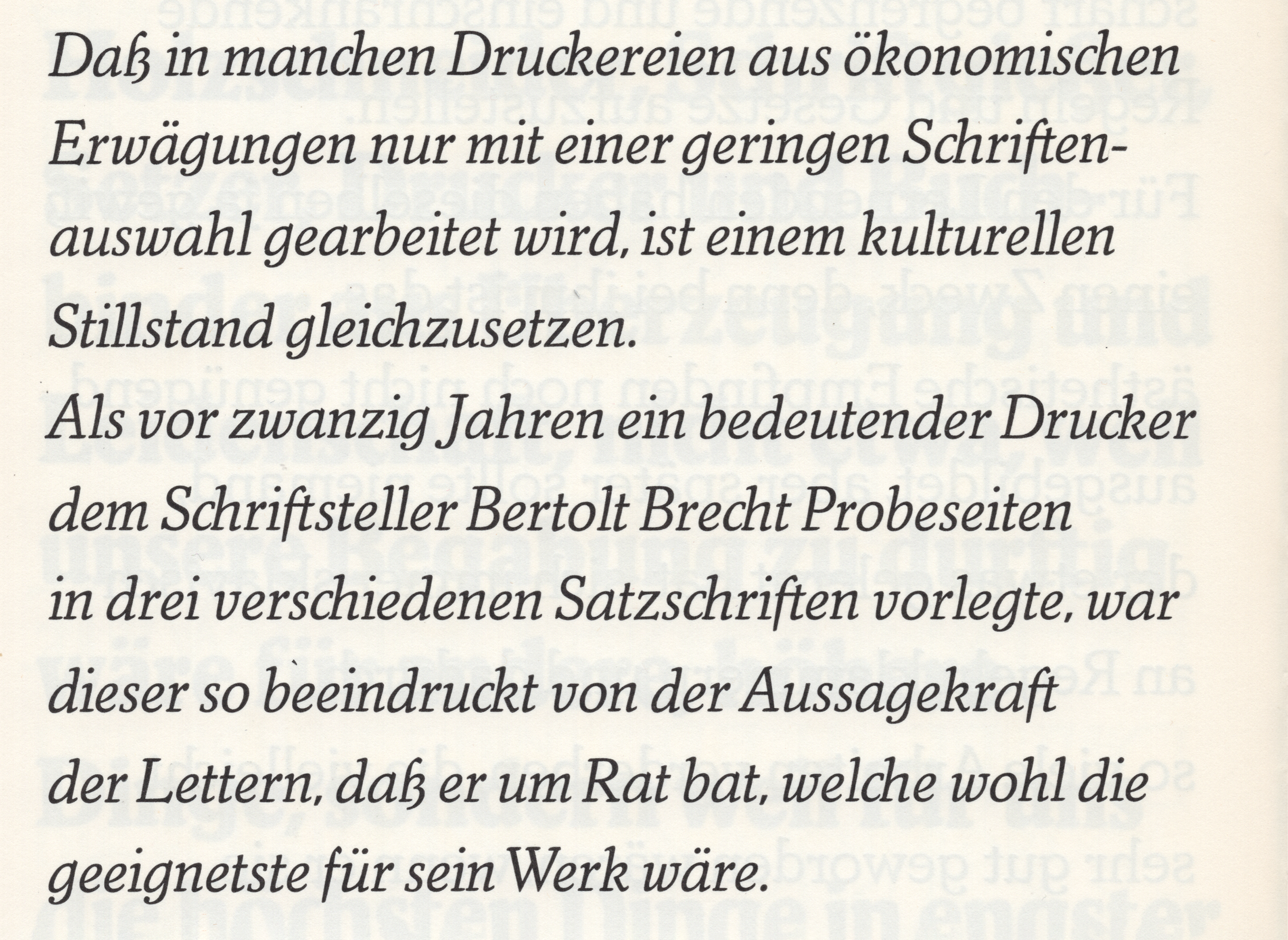 Scan showing a large size of Liberta’s italic, from page 122 of Albert Kapr’s 1973 book, Typoart Typenkunst. Collection of the author. 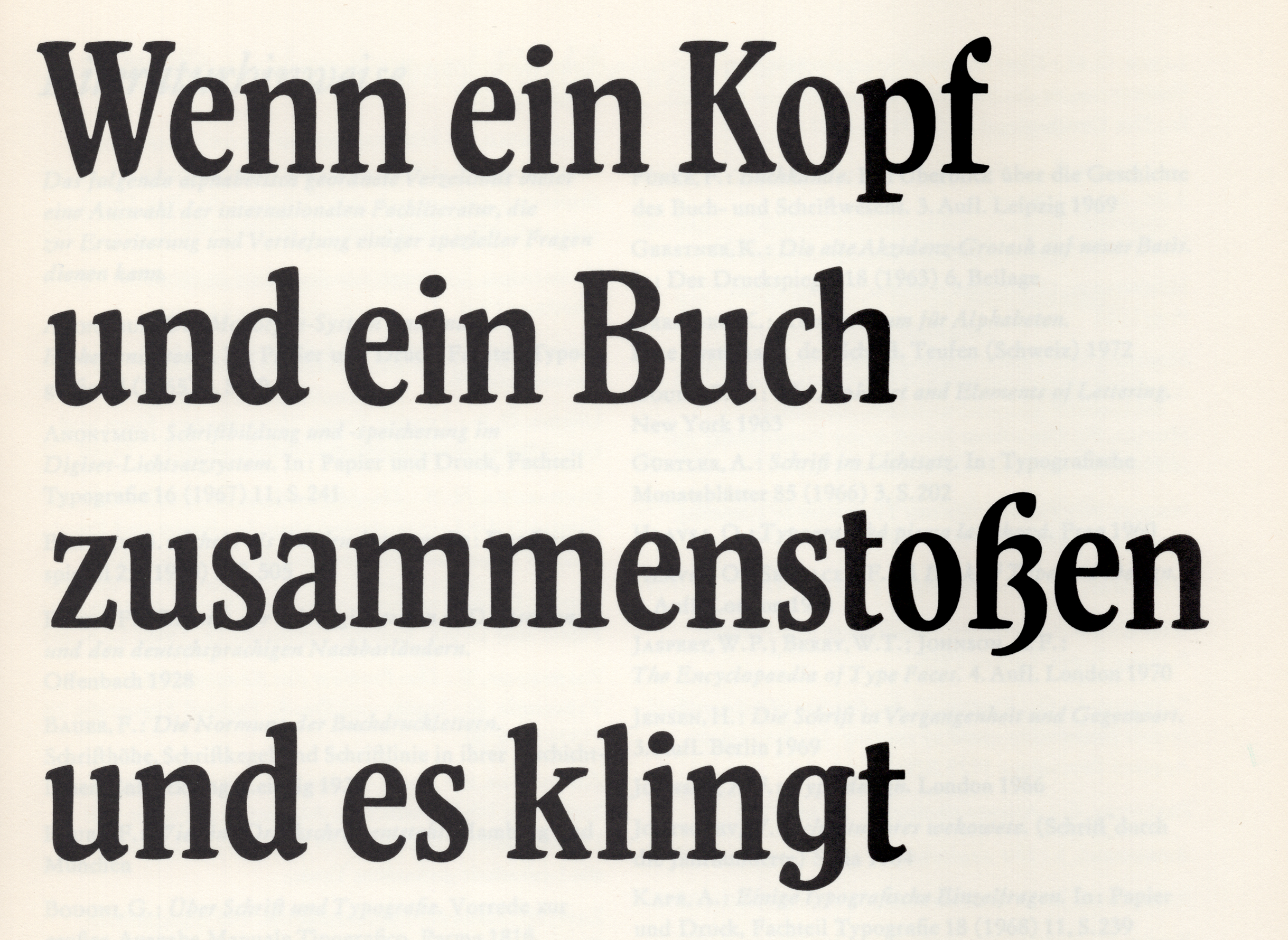 Between 1956 and 1960, the Liberta family grew to have six fonts. That might sound like a small number – and it is much less than what Sibylle Hagmann provides in Kopius and Kopius Condensed – but it was a respectable number of weights and styles for the late 1950s. Kopius and Liberta have many differences. For instance, Liberta’s serifs are rounder than Kopius’, and Kopius’ vertical stems have a writing-influenced movement in them, which Liberta lacks. Looking at Liberta now, it is hard to imagine setting newspaper text with it, but that was its intended medium. Today, it is easiest to imagine Kopius being used in editorial design, especially for magazines. But Kopius is a typeface that also works well in books.

Those people working in the first generation of type-making in the former East Germany were part of a tradition that stretched back to the end of the 19th century. During the first third of the 20th century, the parts of Germany that later became the East German state had a thriving professional community of lithographers, printers, and typesetters; particularly in cities like Berlin, Dresden, and Leipzig. Not to mention poster designers, typeface designers, and type foundries. Herbert Thannhaeuser and Schelter & Giesecke are just two of many examples. Those who survived the Second World War and remained in eastern Germany tried to continue their work after 1945. Other people involved in Liberta’s making are also examples of that continuity. For instance, in Die Entwicklung des Betriebes Typoart in Fakten und Daten – a book later published by Typoart – reports mention that Otto Erler, the foundry’s chief punchcutter, cut Liberta. By this, its authors probably meant that Erler cut the trial size and then supervised that font’s adaption to other sizes (likely assisted by Thannhaeuser). Erler was one of the great punchcutters of the twentieth century. As a communist, he experienced some troubles in 1933 but was nevertheless able to work as Schelter & Giesecke’s last engraving department director and as the first director of Typoart’s engraving department.

In my opinion, Typoart’s typefaces from the 1950s and ’60s had the same level of design and technical quality as the typefaces produced in those decades by West German foundries. The East German political and economic system collapsed after 1989, and Typoart did not survive past the early 1990s. Today, many designers the world over still use typefaces created in West German during the 1950s and ’60s – such as Optima, Palatino, Sabon, and Trump-Mediäval – but the East German typographic legacy has not been celebrated. 21st-century typefaces created by designers without direct ties to the former East Germany (Tim Ahrens’ JAF Lapture is another example) allow us to implement some of those old ideas in new design pieces, in media that people like Herbert Thannhaeuser never could have imagined.

Decades after creating the Libera metal-type fonts, Typoart brought the design into the photo-typesetting medium. However, that update only included Liberta’s heaviest weight, with an upright and an italic font. Since the 1980s, several digital fonts inspired to one degree or another by Liberta have been produced, and you can find an extensive list of them at FontsInUse.com. Kopius and Kopius Condensed aren’t the only typefaces on Fontstand inspired by Liberta. Suitcase Type’s Dederon Serif also takes cues from the typeface, albeit less directly. To see the difference, compare the typefaces’ stroke terminals. Dederon Serif’s strokes end in a streamlined manner, making its letters’ counters appear larger. Kopius, on the other hand, has playful terminals on strokes like a, c, s, etc. The name “Dederon,” which Suitcase uses in Dederon Serif and Dederon Sans, merits explanation. In the former East Germany – known in its time by the initials DDR – nylon products were marketed under the name Dederon.

If you’d like to learn more about Sibylle Hagmann, check out Sébastien Morlighem’s Fontstand profile of her Kontour foundry from 2019.